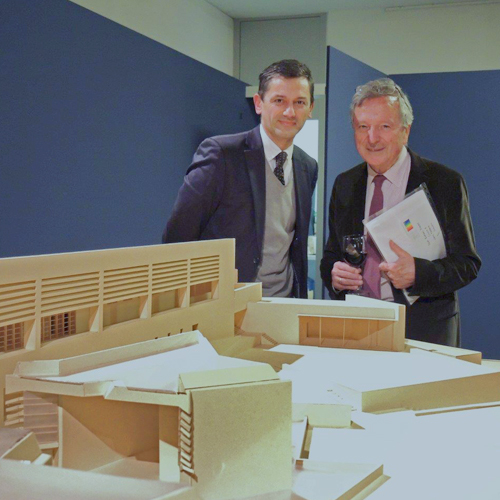 Exhibition Opening and Lecture at the Instituto Cervantes Frankfurt

More than 400 visitors came to the Instituto Cervantes Frankfurt for the opening of the exhibition „RAFAEL MONEO - models for the city” which was designed by Turkali Architekten.

In honor of this occasion the Spanish Ambassador to Germany, S. E. Juan Pablo Garcia-Berdoy, the city treasurer of Frankfurt, Uwe Becker, the Director of the Instituto Cervantes Berlin and Frankfurt, Christina Conde de Beroldingen as well as Prof. Zvonko Turkali addressed the audience.

Afterwards Rafael Moneo gave a lecture on the significance of models for his work.

Until January 31st, 2014 the exhibition will show large scale models of selected works of the world-renowned Spanish architect, which were built within a seminar at the institute of Prof. Turkali at the Leibniz University Hanover.

An illustrated catalogue has been published to accompany the exhibition.